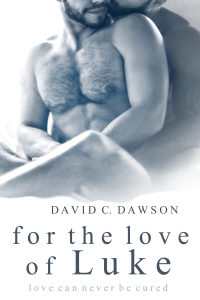 Unconscious on a bathroom floor.

He’s lost his memory, and someone’s out to kill him.

Who is the mysterious Luke?

British TV anchor and journalist Rupert Pendley-Evans doesn’t do long-term relationships. Nor does he do waifs and strays. But Luke’s different. Luke’s a talented American artist.

With a dark secret in his life. 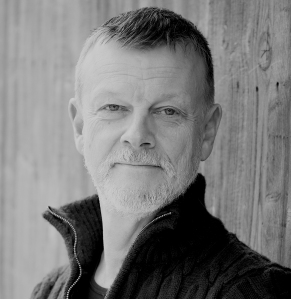 David C Dawson writes contemporary thrillers with gay heroes in love at their core. His latest book For the Love of Luke is a romantic suspense about an American who falls in love with a British man in London.

His debut novel The Necessary Deaths won a bronze medal for Best Mystery & Suspense in the FAPA awards. Rainbow Reviews said it was “an exciting read with complex characters”.

The second in the series, The Deadly Lies, was published last December.

David worked for the BBC as a journalist. He lives near Oxford in the UK, with his ageing Triumph motorbike and two cats.

“Evening, Mother,” Rupert called as he entered the large scullery off the main kitchen. “I’ve come to give you a hand with supper.”

Lady Cynthia Pendley-Evans peered around the open kitchen door into the scullery. She had a pair of reading glasses perched on the end of her nose.

“No you haven’t,” she said. “You’re here because Luke told you we should have a little talk.”

She turned from the doorway and stood with her back to him at the large wooden table in the middle of the kitchen. “Although, now you’re here,” she said, without turning around, “you can scrub some potatoes for me. I’m making a potato salad to go with the gammon.”

Rupert could not remember the last time he had seen his mother cook. It was a pleasant surprise to see her in the kitchen. He unhooked a large pot from above the stove and carried it to the sink to fill with water.

“Don’t keep me in suspense,” he said. “What do you want to talk about?”

“Oh, darling, you are funny,” said his mother. “I want to make sure you’re going to carry on seeing Luke, of course.”

Rupert set the pan of water on the stove with a clatter and lit the gas. He turned and leaned against the worktop with his arms folded. “I have no idea. Does it bother you?”

Lady Pendley-Evans put down the large knife she was using to slice tomatoes and looked at him over her glasses.

“Stop being so defensive, darling,” she said. “I asked a perfectly simple question. He’s a charming young man. Your father and I would be very happy to see you two together—”

“Father would?” asked Rupert. “I can’t believe that for a second.”

“And why the devil not?” said a voice from the hallway. Rupert’s father appeared at the kitchen door, a bottle of gin in his hand.

“Ready for a snifter, old girl?” he asked Lady Pendley-Evans. He looked across to Rupert. “What are you drinking, my boy? Gin?”

“I’ll have a gin and tonic, thank you, Father,” replied Rupert. “Can I help with them?”

“No, no,” replied Lord Pendley-Evans. “You stay with your mother. And tell her why you think I’m such an old fart.”

“I didn’t say that,” protested Rupert.

“No, darling,” said his mother. “But we know that’s what you think of the pair of us.”

“Well,” said Rupert, “I have some reason to.” He pulled a bag of small earth-encrusted potatoes from the cupboard and tipped them into the sink. He began scrubbing fiercely with a brush to remove the soil. “You’ve made it very clear for years that neither of you approve of me being gay.”

“Don’t take it out on the potatoes,” said his mother. “They’ll have no skins left if you carry on like that.” She picked up her knife and resumed slicing the tomatoes. “And you’re being grossly unfair. Of course, we were rather shocked when you sprang it on us. But that’s fourteen years ago. Please bless us with a little intelligence to have thought about it since then.”

Rupert set down his scrubbing brush and turned to look at his mother. “Then why haven’t you said anything before?”

“The subject never arose,” replied Lady Pendley-Evans. “Whenever I’ve asked you about your life in London, you’ve told me very little. I learn more from the Daily Mail about your night life than I do from you.”

Rupert laughed. “No wonder you don’t approve of me, if you believe what you read in that rag.”

“Darling,” said his mother, “it’s not that I don’t approve of you—”

“Well, maybe a little,” interrupted his father. He entered the kitchen and set down a tray of drinks on the table.

“Don’t interrupt, Clarence dear,” said Lady Pendley-Evans. “It’s not helpful.” She turned back to Rupert. “I’m worried about you, Rupert darling. You go to all those dangerous places with your work. We see you on the television in Yemen or Iraq or somewhere equally terrifying. The next moment we read about you in the newspapers, flitting from one nightclub to another. Then once in a blue moon you come back here and spend the whole time being grumpy.”

She took the drink her husband offered her, and tasted it. “Heaven.”

Lady Pendley-Evans took off her glasses and looked at Rupert. “I just want to know when you’re going to settle down and be happy.”

“And we’d like to think,” added his father, “that this young chap might be the one to do it.”

Rupert could scarcely believe his ears. He accepted the tall glass his father handed him and drank from it. He was grateful Lord Pendley-Evans had been generous with the gin.

“When did you change your mind about me being gay?” asked Rupert. “Because I know damn well you hated ‘having a poofter for a son,’ as you so charmingly put it.”

“Yes, well,” said his father. He coughed loudly. “I suppose I’ve had a few years to think about everything—”

“It helped a lot when Roger told you he had a boyfriend,” added Lady Pendley-Evans.

“Roger?” said Rupert with incredulity. “Your school friend who was in the Guards? You never told me.”

“Why on earth would I ask you if Roger was gay?”

“I thought maybe you chaps had a sixth sense about these things,” said his father. “Because I certainly didn’t. Mind you, he seems very settled with Jeremy. So it’s all for the best.”

“And their wedding this spring was absolutely heavenly,” said Lady Pendley-Evans. “All those beautiful young men in uniform. I simply swooned.”

Rupert turned to his mother. “All right. How do you explain me away at All Saints Church these days? Are you still telling them I’m waiting for the right girl to come along?”

“Oh, don’t be so silly.” Lady Pendley-Evans put her glasses back on and resumed preparing the salad. “Reverend Whittaker left years ago. The Reverend Kenneth might be a little progressive for your father’s tastes, but I find him charming. And it’s so convenient that his partner is the organist and choirmaster.”

Rupert nearly dropped his glass. “The vicar of All Saints is gay?”

“I’m sure I’ve told you,” said his mother. But Rupert was certain she had not. “He’s so charming. And he’s marvelous with the flower committee. Anyway. You haven’t answered my question. Is Luke the one?”

Rupert was speechless. Partly because of everything he had just learned from his parents. But mainly because he was unsure of the answer to his mother’s question.

“I really don’t know, Mother,” he said at last. “We’ve known each other for such a short time—”

“That’s got nothing to do with it,” interrupted his father. “I knew with your mother the moment I laid eyes on her. As soon as I asked her to dance, she was the girl for me.”

“And I knew I wasn’t going to get any better than your father,” said Lady Pendley-Evans. “He was quite a catch that season. Luke seems to be a lovely young man. And he’s very smitten with you. Are you smitten with him?”

Rupert set down his glass and leaned back against the sink. He thought back over the last few days. He had never felt so happy in his life.

Lady Pendley-Evans crossed the kitchen to where Rupert stood. She put her arms around his waist and reached up to kiss him on his cheek. “My darling boy. We all have heaps of problems. Life’s like that. But they’re so much easier to face when you’re with someone who loves you. I think he could be very good for you.”

“Hey, hey,” said Rupert. But he could not help smiling. “Aren’t you rushing ahead just a bit? Let me take things at my pace. It’s been a very eventful week.”

“Of course, darling.” She patted his chest and looked up at him. Her face wore the same expression he remembered when she came into the nursery to say good night when he was a boy. “And when the time comes, Reverend Kenneth will be very happy to offer his blessing on you both.”

“Mother,” said Rupert. “Just….” He put his arms around her waist and hugged her. “Hold your horses, eh?” Rupert dropped his arms and wiped his eyes. “But thank you.”

He turned to his father. “Both of you. I wasn’t expecting to hear any of this tonight. And as for the vicar of All Saints—”

He was interrupted by a loud thumping on the front door.

“Who the devil’s that?” asked Lord Pendley-Evans. He put down his drink as the banging on the front door sounded again. “All right, all right, I’m coming as fast as I can.” He stomped off to the hallway, followed by Rupert.

Standing on the doorstep was Christian. He looked past Lord Pendley-Evans to Rupert. “Thank God I’ve found you. Where’s Luke?”

“What on earth are you doing here?” asked Rupert. “I brought Luke here to get him away from London. Just like you said. What’s happened?”

“It’s Pa,” replied Christian. “I think he’s tracked him down. He wants to kill him.”