Four new reviews for you today:

Under “Mysteries” – “Hiss H for Homicide” – a 4 sparkler cozy mystery that has an amazing cat as the star of the book.

Under Nonfiction, three cookbooks. “Small Batch Cooking” for when you don’t want a whole lot of something, “The 30-Minute Prediabetes Cookbook” – a wealth of good information and recipes here. And finally “The Cookie Bible” – just yum!

Thank you to Sparkling Book Reviews for having me back to announce the latest release in my Adrenaline Shots Series! (Note: These are stand-alone quick reads with people falling in love in the middle of an adventure. Only 99 cents each or available in Kindle Unlimited!)

Operation Gratitude: Greta and Finn have always made a great team as part of JOE Ten, a private company running military-adjacent operations. They’ve each buried growing feelings for a long time, but the suppression becomes unbearable when a mission goes sideways.

Facing impossible choices, they are eventually forced to confront them, as well as each other and their own weaknesses. Making the wrong decisions will put their lives, careers, and relationship at risk.

The idea from this story is the end of the first scene, so I don’t want to spoil it. But I had this guy in my head, doing this really stupid, dangerous thing, and that action being the trigger that made his teammate realize she loved him, and vice versa, causing a cascade of complications.

This book was the catalyst for the Adrenaline Shots series. A bunch of friends (including the owner of this blog!) and I had done some short stories in a couple of fun anthologies, but that pursuit ended before the third collection was released, and I had already written Operation: Gratitude. I had SO much fun writing those stories and wanted them to find their audience. And I have so many more to come!

Next up is Endless Secrets and this post is my EXCLUSIVE cover reveal! When Bree finds herself in the middle of a time loop on Valentine’s Day, she decides to use it to her romantic advantage. But she soon discovers it’s not actually fun and harmless, becoming entangled in a race against time (ha!) to…well, save the world, of course! 🙂

Endless Secrets will be released very soon! If you want to be sure you don’t miss this or any other Adrenaline Shots, here are some options:

(You can get Phenomenal Impact, the first Adrenaline Shot, free if you sign up!)

*Bookbub won’t send new release announcements for the Adrenaline Shots because they’re too short. But follow me there anyway! 🙂

And here’s my website if you want to check out my other work.

Thank you, and happy reading! 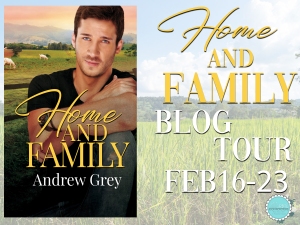 Title: Home and Family
Author: Andrew Grey
Series: Heart, Home, Family Book 3
Genre: M/M Contemporary Romance
Publisher: Self Published
Release Date: Feb 16 2021
Edition/Formats Available In: eBook & Print
Blurb/Synopsis:
Mark has worked on Clay and Dell’s farm for a year, and he’s now in charge of the care and feeding of their growing herd of goats. He’s worked hard to provide for himself and build a life of his own. But with the operation continuing to expand, additional help is needed.
Isaac lives in a self-sustaining, simple-life community a few miles up the road. He’s spent his life working and wondering what the outside world might be like. When his father requires him to earn outside money, he asks for a job at Clay and Dell’s farm.
What neither Mark nor Isaac expects is a friendship that quickly grows into something more. But their feelings for each other go against everything that Isaac has been taught, and acting on those feelings will mean leaving the only way of life he’s ever known.
Together, Isaac and Mark are going to need a great deal of strength to weather the storm that’s sure to head their way.
Book Links
Amazon
END_OF_DOCUMENT_TOKEN_TO_BE_REPLACED

Under Romance: A 4 Sparkler Paranormal with immortals, archangels, demons. “Immortal Justice” by Faith V. Smith is a decent read with interesting characters.

And Teresa has two new movie reviews for you: By the Pricking of My Thumb 1984, and The Sittaford Mystery 2006

Have a bunch of new stuff for you to check out today.

First up, under “Romance” you’ll find three new ones:

“Phenomenal Impact” by Natalie J. Damschroder is a 5 Sparkler short novella (65 pages) that gives you action, adventure, and a touch of romance. It’s science fiction romance at its best.

“Through the Void” – another one by Natalie Damschroder. This is a short story (42 pages), 5 Sparkler read that is also full of action, adventure, and romance with a HEA that satisfies.

A Heart for All Time by Linda Tillis is a 4 Sparkler time-travel romance that takes you back to the late 1800s in North Carolina. It’s a sweet story that gives you a HEA that satisfies as well.

Under “Teresa’s Movie Reviews”, she gives you her insights into Agatha Christie’s “Body in the Library” and “By the Pricking of My Thumbs”.

I just finished SPRING UPON A CRIME by ML Erdahl – a 5 Sparkler Cozy mystery. Below are my thoughts. You can read the full review under “Mysteries”

Thoughts: I loved this story! This was the second in the Seattle Wilderness series. I enjoyed the first one enough to pick this one up as well – and wasn’t disappointed. This is a solid follow up to “Winter Takes All”. We are once again pulled into the life of Crystal, a wilderness guide who seems to stumble into murders. In the way of all cozy mysteries, she is our amateur sleuth who finds out who the killer is (and almost gets herself killed in the process). In this one, she has to save her friend Roxie the chef from being prosecuted for the murder of Roxie’s boss. She’s up against the local cops, developers, loggers, and tree-huggers. I especially loved the character of Emerson. He is perfect. The characters are fun and realistic and the imagery is amazing. The author shows us the northwest without being overly descriptive. And the light romance between Crystal and Conner is well done as well, although Conner isn’t in much of this book due to a sprained knee.