Hello everyone! Today I wanted to share information about my newest release, along with an excerpt from the book! 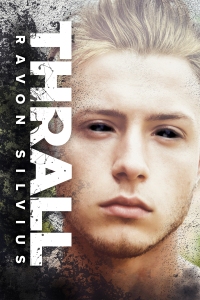 The old Empire has fallen, and humanity is losing the war against powerful vampires. Kaiden, once the pathetic town drunk, is now a thrall, a mindless servant driven only by bloodlust and his master’s orders.

But when his master orders Kaiden to kill a vampire hunter, Kaiden disobeys.

Hunter Johann has spent years studying old lore and killing thralls, but he’s never seen one like Kaiden, intelligent and capable of free will. If he can convince Kaiden to help him, he might reclaim something thought lost forever: a chance for humankind. But he isn’t sure if Kaiden can be trusted, much less become a tool to kill the vampire who created him.

Kaiden doesn’t know who he is or what he truly wants beyond blood. Most of his memories are shadows, and nothing will bring back the life he lost.

Not a vampire, not a mindless thrall, capable of using the old magics, Kaiden is something completely different.

And being different means being alone.

Thrall is a high fantasy vampire story—vampires in a fantasy setting where they took over once the old empire fell. The book begins with Kaiden, a servant of a powerful vampire, and his run-in with Johann, a vampire hunter sent to kill Kaiden’s master. It takes a lot to establish trust between them, as the excerpt below illustrates….

“That’s your name. Kaiden.” Johann’s voice snapped me back to reality, to the crumbling wall I was chained to. Johann sat across the room, his weapon across his lap. “Are you understanding me, Kaiden?”

Kaiden. Not servant, not thrall. That was my name.

“How?” I asked, my throat dry from hunger and thirst. How had he known my name? I had no idea how long I’d been here, but the lack of complete exhaustion told me it was still night. My weakness and hunger, however, told me it had been hours. I’d never gone this long without some kind of blood before.

“There are some in the village who remember you.” Johann’s words hammered in my skull. “A young man. A useless drunk whose mother was a whore. They say your love of drink was a weakness of demons, and that she fathered you with the vampire.”

“That’s not true!” I growled, then stopped, the anger fading as fast as it had come. Why should I care? That was another life. I—no, Kaiden—had been dead for two months, killed in an alley by a vampire. My master.

I was dead. It didn’t matter anymore. My master’s orders were all that mattered. And he had said to kill—

“Kaiden!” Johann shouted, and I blinked. “Listen to me. I can help you.”

Saliva filled my mouth and I swallowed. My fangs still pricked my lower lip. I could not find the words I needed and growled instead, the scent of blood filling my nose. His heart beat loud in my head, a steady, calm drumming that inflamed my hunger with every pulse.

“Listen!” His voice cracked in the flatness of the stone room. “Do you want to survive as a man, or die as the demon everyone claims you were?”

My growling stopped. I looked up, meeting his dark eyes.

“Tell me, Kaiden.” The sound of my name chased away the biting, curdling edge of hunger. “Tell me what you think you are.”

“I….” Saliva and hunger thickened my words. “I am a servant.” My master’s orders boomed once more. Kill him!

“You are not just a servant,” Johann said, his voice the only thing keeping me from snapping my fangs at him. “You are a thrall. A man turned by a vampire lord, bound by his blood to serve him until you die.”

I fell silent. I knew that. I hadn’t known the name, the term thrall, but I knew what my existence was.

“But….” And now Johann stepped closer, his scent overwhelming. His heartbeat steady. “If you truly didn’t care about anything but blood, if you were truly the mindless thrall the others were, you would have died with them last night. But you didn’t. You ran from me. Why?”

I blinked. He stared at me, his torch burning in his hand. The light hurt, and I looked away.

“Why, Kaiden?” Johann said again. The torch hissed as the wood and pitch burned.

“Why do you even ask?” I said. “I didn’t want to….” I trailed off. I was already dead. Saying that I hadn’t wanted to die would sound foolish.

If you want to see more, Thrall is available from Dreamspinner press: https://www.dreamspinnerpress.com/books/thrall-by-ravon-silvius-11311-b

And anywhere E-books are sold!

To see Vicky’s review of “THRALL”, go to the LGBTQ+ for Adults page here.