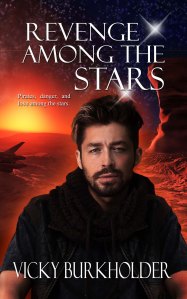 Blurb: Aleksia Matthews is left for dead, after space pirates attack her ship and kill her brother. She swears to avenge his death but knows she can’t do the job alone. After taking out an ad for a bounty hunter, she weeds out the bad from the good, and one man stands out. He could be the perfect partner—and that scares Ali more than the pirates do.

Special agent Jason Cole is tracking the pirates who killed his family, but he’s always one step behind. There have never been any survivors—until now. He needs Ali to identify the attackers, but she proves to be stubborn. She plans to go with him on the hunt, and he’s determined to keep her safe.

While Cole and Ali seek revenge, someone at headquarters would like to see them fail. Together they battle explosions, their emotions, and danger from one of their own.

Bio: Vicky has been married forever to the one person who accepts that she lives in a fantasy world most of the time. She’s even been seen at the beach building worlds for her stories. In addition to creating fun characters, fantasy worlds, and suspenseful situations, she also enjoys and is very good at things like writing policy and procedures manuals and setting up continuity and organizational spreadsheets, both of which she has actually earned money doing. She has a master’s degree in library science so likes things organized. Okay, so her family thinks having the spice rack alphabetized it a bit much, but she has no trouble finding what she needs when she needs it. And just because her extensive library is cataloged and organized, that doesn’t mean she’s obsessive. Honest. When not writing, Vicky can be found in the kitchen whipping up gluten-free, lactose-free, other allergy-free meals. Or watching the world go by from her front porch swing.

The airlock swooshed open, yanking him out into the vacuum of space. He got his bearings and aimed for the huge hole in the side of the little ship.

To combat the stygian darkness inside, he turned on a hand light to add to the lights on his helmet. The light showed a short, empty corridor to his left. Jason turned right and thought he caught a glimpse of bright yellow floating at the edge of his light. He shrugged out of his jets and thrust toward the object. As he drew closer, he could see an emergency suit with someone inside. He checked the gauges on the air supply. Empty. But for how long? He took several deep breaths and unhooked his supply, attached the hose to the suit, and towed the body to the breach.

“Sami? I have the body. No life signs. The systems are off, and the air is exhausted. I’ve temped it with mine.”

“You’ve got one minute to get your butt back here. I’m in as close as I can get.”

Sami’s locks winked at him from a short distance away. He shoved the body through the breach, keeping one hand on the suit so it wouldn’t float away. Once he exited, he grabbed his jets, gathered the bundle into his arms, and kicked off from the ship straight into Sami’s lock. The door slammed shut, and the emergency air flooded in. Almost before the inner door opened, he’d removed his gloves and helmet. Sami had a med-cart waiting for him. He dumped his now heavy burden on the cart and removed the helmet. The vision almost made him pause, but years of training kicked in.

He stripped the suit off the woman and yanked the diagnostic canopy over her.

“She’s in!” Jason rushed the cart toward the cabin that also served as his sickbay. Lights flickered as the displays came on-line.

“Get the cart hooked into my systems as soon as you can. Remotes aren’t going to work well enough,” Sami said. “Wish Dex had my avatar finished.”

“Dex should have the upgrades ready in two weeks. We’ll pick him up next time we’re at the Web,” Jason said. He hated to admit it, but he missed Sami’s avatar too. The android was handy to have around— especially at times like this. And unlike humans, didn’t demand his time or attention.

Jason positioned the head of the cart against the front wall and hooked in the leads. “Ready.”

He studied the overhead display, nodding when the flat-lined heart rate spiked, and then settled to a steady beat. “What do you think, Sami? Did we get to her in time?”

“Brain activity is good. All vitals are looking good. Do you want her awake or asleep?”

Jason cocked his head. “Asleep for now. I’d like to check over her ship. I wonder why the pirates left it more-or-less intact. Why leave this one behind? More importantly, who is this woman, and why is she still alive? And how did she escape? Or did she? Could she be one of them? In all these months, they’ve never left more than pieces of ships too small to even sell for salvage, and they’ve never left anyone alive. Why now? And why her?”

“Maybe they saw us coming?”

Jason snorted. “They were long gone by the time we got here. Keep her asleep until I get back. Then we’ll try for some answers.”

“No problem.” A fine mist flooded the unit.

Jason took a minute to study the woman inside. She had some lean height to her with curves in all the right places and the pale skin marking her as a spacer, but not the roughened features of most miners or grubbers. Her short, white-blonde hair curled softly around her face—the length also marked her as a spacer—short hair required less water, less time. It looked as if her nose had been broken sometime in the past, and her chin looked too angular for her to be called a classic beauty, but he thought her face beautiful anyway. He fingered his own nose and wondered why she hadn’t had hers fixed like he had.

“While you’re looking, do an ID scan on her and her ship. Let’s see if we can find out who she is. How’s she doing?”

“I already did the ship—there’s nothing there. The ship’s ID has been wiped clean.”

“Odd. Okay. See what you can find out about her. I’d like to talk to her—find out her occupation and her reason for being out here. How about her health?”

“She has a touch of minor frostbite, and I’ve detected higher than normal levels of CO2 in her bloodstream, consistent with her systems being down. I contacted Doc at the Web and got his input. I’ve already started the remedies. Are you leaving, or are you just going to stand there and stare at your slumbering beauty?”

“One of us has to keep things moving.”

He grumbled but got out a fresh air pack and locked on his helmet. A few minutes later he returned to the scuttled ship. He did a check on the systems, but nothing remained. No wonder they couldn’t ID the ship. The pirates had trashed the bridge. The breach had been in the hold so he didn’t bother going there. Amidship he found four small cabins and a gathering area. Had there been others on this ship? If so, where were they?

The first two cabins were empty, almost like guest cabins. Nothing more than the basics. The third one was a mess. Personal items floated around, mixing with data cubes and bedding. He snagged several of the items and studied them. Men’s things. Maybe a married couple? There was nothing feminine about anything here. If married, they didn’t share quarters. He grabbed the data cubes and stowed them in a bag to take back to his ship. The rest he ignored.

He closed the door on the room and floated to the last one. The door wouldn’t open, and there was nothing to brace against to force it, no way to get a grip.

“Sami? A ship this old, where would the controls to the door release be?”

“Should be one meter up from the floor and one centimeter to the right of the opening.”

Jason removed a small laser torch from his tool belt and aimed the beam at the spot Sami indicated. He sliced through the paneling, exposing the catch. He ripped the wires out then shoved at the door. The opening widened centimeter by centimeter until he had enough room to slip through.

Unlike the other cabin, very few things floated around. He snagged a silky shirt and smiled. The woman couldn’t be a grubber if she wore stuff like this. Although she had the looks, he didn’t think she belonged to the Magdalene Guild.

He studied the cabin. So, who and what was she? He opened a few drawers. Everything had been stowed neatly, in a specific manner he knew intimately. He hesitated, his hand on the drawer under the washbasin. “Comb and brush on the right, oral hygiene in the middle, scissors and clips on the left.” He opened the drawer. The interior looked exactly like he thought it would.

“Have you found out who our guest is yet?”

“I’m waiting for the data to come in. There’s an ion storm disrupting communications with the Web. Why?”

“Check her out with IMF. Unless I miss my guess, she’s had some training, maybe even graduated.”

“Interplanetary Military? Interesting. I’ll let you know as soon as I get through.”

REVENGE AMONG THE STARS