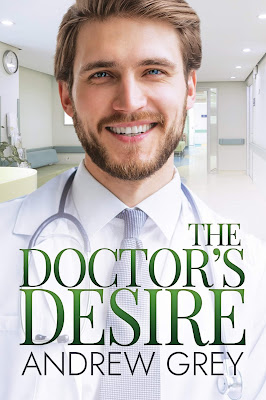 Title: The Doctor’s Desire
Author: Andrew Grey
Series: Carlisle Medical (Book 2)
Release Date: Mar 29 2022
Edition/Formats Available In: eBook & Print
Blurb/Synopsis:
General practitioner Dustin Avarilla has been on the job for a few years—long enough to find out that some doctors, especially his boss, don’t see things the same way he does. Dustin believes that the patients come first, but his boss is more concerned with the bottom line. When Charles Morton brings his very sick niece in right at closing time, Dustin’s care starts trouble with his boss, but touches Charles’s bruised heart.
Charles is nearly frantic when his niece becomes ill. He’s had custody of Anna for only six months, following her parents’ sudden death, and he might be in over his head. Dustin is gentle and caring, which is just what his little patient and her Uncle Cheesy need. Charles feels his focus has to be on Anna, and the last thing he’s looking for is love. Dealing with a new job and town, along with becoming a parent, is almost more than he can handle.
Charles and Dustin meet again at a friend’s party, with heated attraction drawing them closer. One dinner leads to a date, with chemistry building by the second. But Charles’s mother, who feels Anna should be left in her care, and Dustin’s boss, who decides their relationship isn’t up to the family image of the practice, form an unlikely alliance that threatens to pull their budding relationship apart. While alone, they are vulnerable, together they might just get everything they desire.
END_OF_DOCUMENT_TOKEN_TO_BE_REPLACED