For this stop on my blog tour, I wanted to share an exclusive excerpt from one of my favourite scenes in Hart of Winter. Luc Marling is a shapeshifter, cursed to change into a stag every sunset if not for his magical cuffs. However—and more importantly—Luc is an absolute goof of a man, and he is smitten with Rob Lentowicz, who is newly arrived in town.

In this scene, they’ve arranged to meet at a bar called L’Arbre. Luc has no idea if it’s a date. He wants it to be. He hopes it is. He’s been thinking about it a lot. So much, that he goes on autopilot when greeting Rob.

… Did I mention Luc’s family is French?

I hope you enjoy this scene!

Warm air brushed over Luc’s skin when L’Arbre’s door opened and closed, laughter and music spilling outside. Luc stamped his feet and wished he’d worn different boots. He ducked his nose under his scarf again and got distracted by blowing plumes of steamy breath through the folds, so when Rob tugged his sleeve for attention, he jumped.

“Same to you, Prince Charming,” Rob said, though his grin took away the bite of his words.

Luc shoved his hands deeper into his pockets so he didn’t cover his face in embarrassment. At least his cheeks were already flushed with cold. No one would be able to tell the difference.

Rob wore a slim-fitting leather jacket over a flannel shirt and dark-wash jeans with cute ankle boots. Like Luc, Rob’s—freckled!—cheeks were bright with cold, and though his red beanie was pulled low, it didn’t hide the redness of his ears. Despite the brisk air, Luc felt warm. Not only from embarrassment: Rob hadn’t dressed for the weather either.

Buoyed by confidence, Luc was halfway toward the second cheek kiss when his actions registered in his brain. Rob’s aftershave was the clue, something woodsy and delicious and not at all like what Eloise or Amandine wore. He froze.

“Balls.” Would it be more awkward not to complete them? Date or not date. Would Rob even know enough about French cheek-kissing etiquette to register the difference? Unlikely. His French had been dreadful.

Noise from L’Arbre made Luc start, and the blast of warmth made him impatient. They could be indoors right now with beers in hand. His stomach twisted nervously, but he finished the second kiss—he decided against a third—and stepped back. He yanked out the tie holding his hair in a stubby tail at his nape, scrubbed his hand through it, and retied the tail, all the while looking anywhere but Rob.

Hair in place, Luc cleared his throat and finally slid his gaze to Rob, who hadn’t moved during the whole process. Indeed, he watched Luc with an odd expression, like he found Luc’s awkwardness charming.

Luc cleared his throat again. “Sorry. About the unasked-for kissing and the swearing and this general”—he gestured at himself—”sort of disaster area. Hello. Lovely to see you again. I like your interpretation of the carnation.” He pointed at Rob’s hat. “Anyway, shall we get a drink so I can start repressing all this for my subconscious to torture me with later?”

For a moment Rob continued to watch Luc in silence. Then a grin broke onto his face like he’d landed his first box jump. His eyes crinkled at the corners, and Luc saw one of his front teeth was slightly crooked, and his laugh. Rob laughed like he couldn’t get enough breath, like he wanted the world to know how funny he found Luc’s awkwardness.

Luc resisted getting defensive; there was nothing malicious about Rob’s laughter. Luc snorted and waved his hand in a little bow, as was his due. When he finally wheezed and straightened up, Rob clapped Luc on the back and somehow turned the move into a slide of his arm over Luc’s shoulders, pulling him close until Rob’s body half cradled him.

Luc could get used to the arrangement. Even if laughter was the price.

“Come on, mate. Let’s get that drink. After that performance, you deserve it,” Rob said.

Luc let himself smirk. “Sure you want to?”

“Well, no one can say I don’t know what I’m getting into now, can they? And anyway, it’s not like I minded the kissing.”

With that, Rob pulled open the door and ushered Luc ahead of him, both of them startling slightly at the wash of hot air and noise. Rob nudged Luc over to a table people were just leaving, and Luc slid onto a stool. He watched Rob gather the empty glasses together and shed his jacket at the same time, impressed by the multitasking. Luc would’ve smashed at least three glasses if he tried to do that.

Especially if he was still thinking about kissing Rob. Which he absolutely was.

Luc Marling is cursed to transform into a stag from sunset to sunrise, making him vulnerable to black-hearted collectors. Thanks to a family heirloom, Luc can contain the change—but the magic is starting to fade. Luc intends to live fast while he can and doesn’t care who he hurts along the way… until he meets Rob.

Rob Lentowicz accidentally broke the curse on a famous singer and became a magical reality-TV star. Tired of having to lie to protect his bank balance, and unwilling to destroy his family reputation with the truth, Rob runs away to France—and straight into Luc.

They navigate slopes, secrets, and each other. But are the feelings between them real—or just magic? 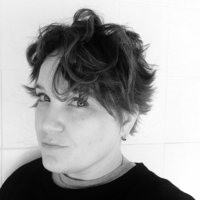 Parker Foye writes speculative-flavoured romance under the QUILTBAG umbrella and believes in happily ever after, although sometimes their characters make achieving this difficult.

An education in Classics nurtured a love of heroes, swords, monsters, and beautiful people doing stupid things while wearing only scraps of leather. You’ll find those things in various guises in Parker’s stories, along with kissing (very important) and explosions (very messy). And more shifters than you can shake a stick at.

Parker lives in the UK but travels regularly via planes, trains, and an ever-growing library.

Links for Hart of Winter