Hi, everyone! I’m Bru Baker. Thanks to Vicky for having me on the blog today as I continue my release tour for Downward Facing Dreamboat.

This slow-burn novella is about a distance runner whose perspective on his life changes when an injury sidelines him from his marathon training. Kincaid has always loved running, but he didn’t realize how much of his life 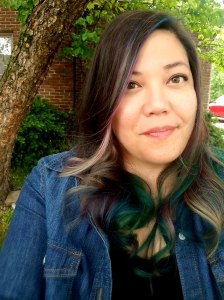 was tied up in the sport until he couldn’t run anymore.

The reality check is a harsh one. Kincaid was used to spending all his waking hours outside of work running and training for races. Even hanging out with his friends involved running–and when he can’t, it becomes apparent that he doesn’t have much else in common with them and they drift apart.

His loneliness–and a dose of tough love from his sister–encourages him to stick his neck out a bit and take some chances, both with his hobbies and his love life. Yoga is a daunting prospect for him, but he tackles it because his doctor tells him it will help him heal faster and get him back on the marathon circuit.

But when his doctor sends him to a studio that happens to employee a yoga instructor he’s been panting over in secret for months, he has to choose between keeping his attraction a secret or doing something about his loneliness even if it means risking his heart.

Love is trying to catch up to two lonely men. Can they stop long enough to let it?

Running defines Kincaid’s life. It’s not until he loses it that he realizes how isolated he’s become. But even if an injury hadn’t forced him to slow down, the hottie in the yoga studio would have given him pause. In fact, admiring the man each morning is the only thing keeping the spring in his step when it feels like he’s lost everything.

Owen’s busy life as a yoga instructor doesn’t leave him much time to meet guys, let alone date. He’s convinced his passion for helping people is worth the sacrifice, but he’s willing to spare a few moments for the cutie who walks past the studio every morning.

When their lives intersect and romance is set in motion, they stumble off the starting block. But no matter the obstacles in their path, this race won’t be over until they reach the finish… together.

“Do you have other evening commitments we need to plan around?”

“I spend most of my free time training for races, so since I can’t run I don’t have a lot going on. I have a group of friends I travel around the country with for marathons, and we usually run together after work and on weekends. I’m hoping I can get over this injury and back into running shape without having to sacrifice the Maui marathon we do every other year.”

Kincaid hadn’t realized how much of his life revolved around running until he couldn’t do it. He’d watched more Netflix in the past three weeks than he had in three years before that.

“Ooh, I can see why you wouldn’t want to miss that,” Owen said. “I’m here Monday and Wednesday evenings. I’d like to plan to do a few private lessons before we transition you to a class. That way I can help you modify poses that would put too much stress on your ankle. You can stop in or call when your PT gives you the okay to get started. If I’m not here, tell them I told them to give you my first available evening, okay? I’d rather not enable your procrastination.”

Owen’s grin lit up his face. He had laugh lines around his eyes, and they crinkled up endearingly when he smiled. “Great. I’m looking forward to it.”

Kincaid stood cautiously, but luckily the throbbing pain in his ankle had subsided.

“We’ll be taking things slow, which I know will be frustrating for you. You need to focus on your actual physical therapy more at first because you need to address the issues the stress fracture has caused before we can start preventing future damage with the yoga.”

“Yoga will help make sure this doesn’t happen again?”

Owen nodded. “It’s not a guarantee, but it will definitely help. Do you cross-train?”

Not as much as he should. Kincaid swam and lifted weights when it was too cold or wet to run outside, since he didn’t like treadmills. But mostly he ran.

“Well, yoga will help strengthen your core and get you to stretch out those quads and hamstrings. Loosening up your legs will help your form, which can help avoid repetitive stress injuries like this one.”

He tapped the card in Kincaid’s hand.

“Be sure to call once you’re given the okay. I can tell you’re anxious to get back out there, and I swear this will help.”

“I see Dr. Chester again today for another X-ray. He told me if this one looks good, he’ll release me to physical therapy.”

“Even then, no running. Your PT will probably have you hold off on weight-bearing cardio for another week or two. Sometimes bones heal in that month off, sometimes they take longer. We won’t know till he sees your X-rays. Swimming, biking, and some faster walking will probably be the PT’s recommendation. And I’ll do my part to get your heart rate up, I promise.”

Kincaid swallowed at Owen’s unintentionally suggestive words. That wouldn’t be a problem. He’d recovered from his initial nerves, but even now Kincaid’s heart was racing from being so close to Owen. How was he going to survive having Owen guide him into yoga positions without embarrassing himself?

Owen seemed to read Kincaid’s discomfort, and he tilted his head to the side for a moment, his cheeks coloring lightly. “Ah. I didn’t mean it like that.” He looked flustered, which was adorable. “It’s just that most athletic guys figure yoga is a walk in the park, but it’s actually as easy or as difficult as you make it. If you put effort into your practice, you’ll find that it’s very satisfying.”

Kincaid’s lips twitched at Owen’s choice of words, which caused Owen to close his eyes and chuckle. “I mean, you’ll find it’s a satisfying workout. Wow. I apologize. My mind must be somewhere else today.”

“I’m looking forward to you getting my heart rate up.” Flirting openly wasn’t something Kincaid usually did, but he couldn’t help himself. Maybe he did have some game after all.

Owen coughed and looked away, but Kincaid was almost positive it was to hide a smile.

“Okay, getting us back on track. You’re obviously an avid runner. How about other sports? Any yoga before, Kincaid?”

Kincaid grinned. Owen was changing the subject, and he definitely had a faint blush to his cheeks. Kincaid was usually horrible at gauging interest from other people, but he would bet good money that Owen was enjoying their banter. He hoped there would be time to explore that later.

“Once. My sister is into it, and she dragged me to a class a few years ago. All I remember is it being ridiculously hot and not understanding most of what the instructor said for the whole hour and a half.”

“Sounds like Bikram. They heat the room to about 105 degrees Fahrenheit to help practitioners sweat out their toxins and loosen their muscles.”

“I felt like I was trying to sweat out my spleen.”

“So no Bikram yoga for you. Got it. Do you remember any of the positions? Were there any you particularly liked?”

“The only pose I remember was Natalie doing something on her belly with her feet arched up to almost touch her head. I didn’t even try that one. It seemed like there was a high risk of accidental castration.”

“So you’re funny as well as handsome and athletic?” Owen teased, and Kincaid preened internally at the compliments. “In English it’s called full locust pose, but I always find the Sanskrit words more fun to say.”

Before Kincaid could respond, Owen held his hand up and shook his head. “Don’t worry. I don’t break out into Sanskrit until at least the fifth class.”

Kincaid was sure he still looked horrified, if the way Owen laughed was any indication. “Kidding. I always call out poses in English, and I’m right there modeling the pose for the class. Obviously while we’re doing the one-on-one sessions I’ll be there guiding you into position. Don’t worry. I won’t get you in over your head.”

Bru spent fifteen years writing for newspapers before making the jump to fiction. Whether it’s creating her own characters or getting caught up in someone else’s, there’s no denying that Bru is happiest when she’s engrossed in a story. She and her husband have two children, which means a lot of her books get written from the sidelines of various sports practices.