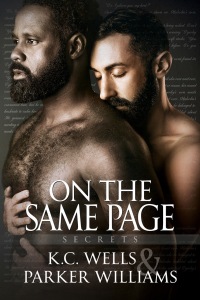 In ‘On the Same Page’, one of our characters owns a bookshop. KC and I thought it would be fun to talk about our favorite books.

My first MM Romance was a book called ‘The Telling’ by Eden Winters. Here’s the blurb:

Time in Iraq cost Michael Ritter some of his hearing and a friend whose death he feels responsible for. He’d left Alabama hopin g to escape a dull, small-town life, only to return four years later, lugging a duffle full of personal demons.

Cookesville, Alabama isn’t the most welcoming place on earth, particularly for a gay, Hispanic student wanting nothing more than to earn his degree and get back home to Texas. An image of a somber young man that he knows only by name and the stories told by an adoring sister comes to life when Michael returns home, just as Jay is already half-way to losing his heart.

Michael’s biggest battle lies ahead, and he’ll need all the help he can get to find his way in a world where he no longer fits in. Jay’s not sure where he fits either, but it could be next to the war-torn soldier who needs his strength.

This story hit me hard in the feels, because Michael, our hero, is damaged in ways most of us will never understand. War has left him with partial hearing loss, and PTSD. Things many of us take for granted, like fireworks, are forever denied him because of the things he experienced while at war. Then there’s also the fact he lost something else, something that can never be replaced. A friend.

Because this was my first book, and I loved it so hard, I decided I would write the author, Eden Winters, and let her know. Now I’m going to be honest here. My belief was that a PA or publicist would get the letter, and Eden would never actually see it. I couldn’t have been more wrong. Not an hour after I sent the letter, Eden replied. We got to talking, and from that humble beginning a friendship grew.

The Telling (and the follow up, ‘Night Watch’) gave me my first real glimpse into MM Romance, and I’ve never stepped away from it.

(The book is .99 at Amazon, and Eden makes a donation from the money she raises on it.)

The first gay romance I ever read was about…cowboys.

Not something I usually read about, to be honest, but I was dipping my toes in a new genre.

And I was hooked.

It had everything, including my first ever group sex scene. And my heart broke when things went bad between Jake and Tor, and you bet I was rooting for them to get back together.

I went on to read more of Chris’s books, and I’ve been a fan ever since.

Fast forward to the present day, and I’m contemplating writing a cowboy story….

Blurb for “On The Same Page”

When a Dom invites a shy bookstore owner to live out his fantasies, more than one life will be transformed.

Words are Heath Snow’s life. He can’t remember a time when he didn’t have his nose buried in a book. He couldn’t make a living as a writer, so he did the next best thing—he bought a bookstore. But when he’s not selling books, he’s living vicariously through the characters he encounters. Real men can’t hold a candle to the hot men in his favorite genre.

Xavier is about to learn that some things are more important than work, and Heath is about to step out of his comfort zone, into a place where fantasy and real life coexist.

K.C. Wells lives on an island off the south coast of the UK, surrounded by natural beauty. She writes about men who love men, and can’t even contemplate a life that doesn’t include writing.

The rainbow rose tattoo on her back with the words ‘Love is Love’ and ‘Love Wins’ is her way of hoisting a flag. She plans to be writing about men in love – be it sweet and slow, hot or kinky – for a long while to come.

You can stalk – er, find – her in the following places:

Parker Williams loves the written word. The discovery of MM romance, as well as a chance encounter with an amazing author, changed the course of his life as he began to write the stories his men were whispering to him. With the help of some amazing friends and a community of writers he’s proud to be part of, Parker continues telling stories of love, hurt, comfort, and sometimes tosses in a little angst for fun.

K.C. and I would like to offer an e-book copy as a prize. Leave a comment including your email and format preference and we will contact you. Thank you!